One dark and stormy night in October in the haunted city of Indianapolis, storyteller Lou Ann Homan and her friend Carolyn Powers attended Frankenfest sponsored by Indiana Humanities. In case you don’t frequent your public library, Mary Shelley’s Frankenstein was chosen as the One Story/One State book for 2017-18, and this was the kick off event. (See me after class if you are someone who does not visit your local library! I consider my library card to be the most lucrative currency in my wallet!)

You know what, Indy? You are pretty darn cool to host such a frighteningly fun event!
On the long drive back home, Lou Ann and Carolyn decided to apply for a grant to have the Frankenfest in their hometown of Angola, which they were awarded. The festival will take place on October 13, 2018. Congratulations, Lou Ann!

Lou Ann then had an inspiration: “I love Mary Shelley, but we are just talking about Frankenstein here! I should become Mary…I already love her! I should bring her spirit to life!”  I guess you could say that Mary Shelley’s “world was a secret that [Lou Ann] desired to divine!"

And every night since that night in October, Lou Ann has perched at her desk in her atelier of her purple Victorian by candle light, scribing into the wee hours of the morning to bring Mary to life. And thus “Mary and Her Monsters” was divined to life:

In August of 1816, the stage was set for Mary Shelley to write her classic "Frankenstein" novel. Who was Mary Shelley? What were her own monsters and how did this book come to be? Join storyteller Lou Ann Homan as she portrays Mary Shelley. The story is riveting and none can tell it better.

Mary and Her Monsters is Lou Ann’s fifth show at IndyFringe. Others include Auditioning for Swan Lake, I Was a Virgin Nudist, Hoosier Roots, and A Baptist Girl's Guide to Sex, Love and the Happily Ever. Mary has been proven to be the biggest challenge: “All the other shows were stories from my life. I loved doing them all, but it is one thing to tell your own stories (although much writing and crafting goes into that also!), but to become someone from history? Research, research, research. Where does Mary fit into my brain? How to become her? Very challenging and chilling,” Lou Ann explained.

I admit, I was surprised about the “chilling” part. I’ve always heard it told that one night on a romantic getaway in Switzerland, Mary Wollstonecraft sat around a fire with her lover, the dreamy poet Percy Shelley and his BFF Lord Byron. As a form of entertainment, they each devised a ghost story to see who could tell the scariest one. If this were a record, someone would be scratching the needle off it right now, because after seeing this show, I realize how wrong I was about that account! Go see the show if you want some real drama. Frankenstein was a drop in the bucket compared to Mary Shelley’s life.

Besides IndyFringe and Storytelling Arts of Indiana, her favorite things to do in Indy include seeing shows at The Phoenix theater, seeing movies at Keystone Arts (“Can’t get some of those independent movies in a small town,” she says), and getting a good beer at Chatham Tap. (I wonder if Lou Ann knows that Chatham Tap was previously an art gallery, and once during a Halloween party my friends threw there, we experienced some, shall we say eerie things in the basement!)

Although Lou Ann’s second home is Indy, and many people think she lives here, Angola is her true love. “I love living in a small town. I am involved in as much as possible. I live in the middle of town so I can bike everywhere. I love being part of the humanities department at Trine University. I love serving on boards, the Downtown Coalition and the Historic Preservation Commission. I love a place where everyone knows your life…the ups and downs, and people who appreciate the work I do. I love being on the road, but always make a swing around the circle [in the center of town] when I come home, always with a sigh of happiness.”

Hearing Lou Ann make such declarations about Indy, Angola, and creating “Mary and Her Monsters, I’m reminded of a phrase in Frankenstein: “There is love in me the likes of which you've never seen.”

Now, who’s up for a field trip to Angola in October to see their version of Frankenfest? As for us, we’ll stay at Angola’s finest inn: The House at White Picket Gardens.

To get to know Lou Ann better, visit her blog where she tells the delightful comings and goings of a simple life that is full of stories, friends, family, flowers, books, homemade bread, mouthwatering pies (true story: she once thwarted a greedy IRS agent with a slice of her famous pie), and some good ol' Americana where she believes we should all “Live, and be happy, and make others so.” (Shelley)  It is a breath of fresh air! 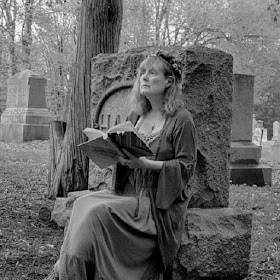 One of Mary Shelley's favorite places to write was beside her husband's grave. That Percy Shelley: what a monster he was! (Go to the show to learn more!) 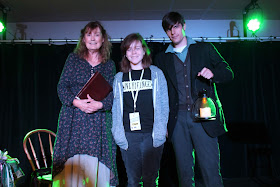 Lou Ann, stage manager Melia, and narrator Jacob McNeal. Lou Ann was adamant that this was "their" show, not "her" show. She met Jacob after he performed in MacBeth at
Trine University. You have got to hear this guy's reverberant voice and see his unbelievably shiny hair! Lou Ann credits Melia with creating the mood for the play. "All I had was one lights up and one lights down, and Melia, this seventeen year-old girl running a light board that was two generations old said to me, 'This is Mary Shelley. We must do better. Do you trust me to design some light and sound cues for you?' and I said, "I do." 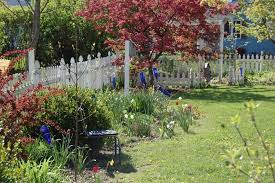 When we go to Frankenfest, we will stay at White Picket gardens, where the lovely and doting hostess spritzes the sheets with lavender water and regales her guests with stories by candle light!